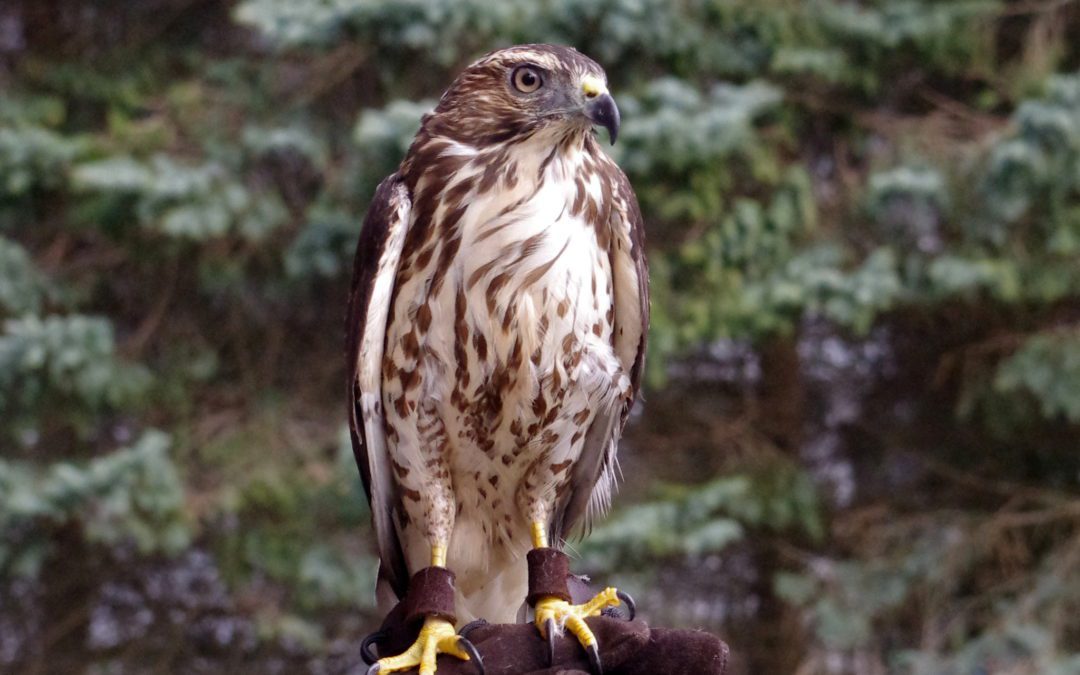 Nothing excites our visitors more than seeing raptors up close and personal.  There are many ways to do that at Braddock Bay, from the hawkwatch to the banding station to the Owl Woods.  Encountering  wild raptors in their natural habitat is surely a thrill.  Just as thrilling is getting to see these birds even more closely, in a way that helps people really connect with the species.  BBRR is excited to announce the arrival of a new ambassador for the organization – this non-releasable Broad-winged Hawk. The Broad-wing comes to us from Kindred Kingdoms Wildlife Rehabilitation Center, north of Syracuse, NY.  He came into the care of wildlife rehabilitator Jean Soprano after he was hit by a car near Watertown, NY.  Unfortunately he sustained injuries that would prevent his release back to the wild.  He is now missing his left eye and also has some permanent damage to one wing.  Despite these injuries, he is quite a beautiful bird, and has a very charming personality, making him a good candidate for educational use.

The Broad-wing is a juvenile, hatched sometime last summer, so he is sporting the plumage of a youngster right now.  He will molt into his adult plumage this coming summer, which will give him that diagnostic wide white tail band, and his streaky chest will change to one with rufous colored barring.  It is believed that he is a male due to his size being on the lower end of the spectrum, and males tend to be smaller than females in the raptor world.

After only a couple of months in his new BBRR home, the Broad-wing has proved he is ready to go out into the world and take on his new job as an education bird.  He recently made his first appearance at a local Brownie Troop meeting.  The girls were learning about backyard birds and had plans to create some homemade bird feeders.  They were the perfect audience to start the Broad-wing out on his new career, as he showed he was very comfortable in his unfamiliar surroundings. Daena Ford presents the Broad-winged Hawk to some Brownies from Honeoye Falls.

BBRR’s Broad-winged Hawk is the first addition to the new education bird program we are calling Raptor Connections.  The goal is to add 3 more birds to the collection, all of which will be program birds, available for outreach and other educational appearances.  Stay tuned for updates as we acquire new birds.  If you would like to schedule a Raptor Connections program with our Broad-winged Hawk (and other birds in the future), contact Daena Ford at information@bbrr.org or 585-267-5483.