The BBRR banding operation was initiated by Clayton Taylor in 1984. BBRR was formed in 1986 to ensure the continued study of the hawk migration at Braddock Bay. Our location provides the opportunity to capture birds along the Great Lakes during the spring migration and also at the end of summer during a rather unique flight of Red-tailed Hawks. Fourteen species of hawks, falcons and eagles have been regularly documented at the hawk watch and many have been captured and banded at our stations. Raptors banded at Braddock Bay have been found in Florida, Virginia, Ohio, Minnesota, Canada and many other locations. Birds banded in Canada and nearby states have been recaptured at Braddock Bay. A Sharp-shinned Hawk holds the record for the furthest recapture  It was banded in Vera Cruz, Mexico!

Each year licensed banders safely capture and release raptors, including hawks and owls, at Braddock Bay. During their short time in captivity, valuable biological data is collected from each bird. Before release, each bird is fitted with an aluminum leg band containing a unique identification number. All data is submitted to the Federal Bird Banding Laboratory in Maryland. If a banded bird is later recovered, the number on the band can be reported to the Bird Banding Laboratory.

Hawk banding operations at Braddock Bay are conducted from March through May and again in August. Visitors are always welcome at the Main Banding Station, even without an appointment or invitation. We only ask that visitors follow banding station etiquette. Please yell “clear” at the designated location along the trail before entering the blind. Then wait to be invited into the blind by the bander once there is no chance of interrupting a capture. We also request reservations for larger groups who wish to visit the banding station. Contact information@bbrr.org to make such a reservation. Click the links below to read recent raptor banding reports

The following encounters were received on birds initially banded at Braddock Bay.

Foreign Recoveries: The following birds were initially banded at Braddock Bay, and captured again this spring by David Mathiason.

In early March of 2015, before our banding stations were up and running, BBRR’s Banding Director Anne Schnell spotted an adult Red-tailed Hawk feeding on a deer carcass on her property in Hilton, very close to Braddock Bay. This Red-tail was unusual because it possessed patagial markers, or wing tags, which were green with white numbers on them. After reporting this sighting to the Bird Banding Lab, we came to find that this Red-tail was part of a relocation project conducted at Chicago’s O’Hare International Airport! It was initially captured as a hatch year bird on 9/27/13, and relocated from the airport to a state park in Ogle County, IL. Researchers involved in the study were very interested to know that this bird ended up all the way out here in NY!

Both banded and wing marked birds can be reported by the observer on the Bird Banding Lab’s website. https://www.pwrc.usgs.gov/bbl/ Reporters will receive information about the bird and receive a certificate from the lab. The website is also full of great information about bird banding research. 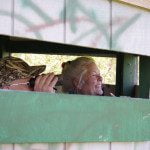 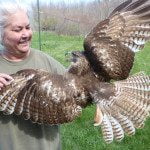 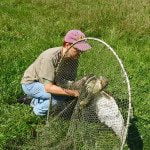 BBRR banding staff are all volunteers. Each person is licensed with both federal and state permits allowing them to capture and band the various species of raptors. Hundreds of hours are put in to training before becoming licensed. To find out what it takes to become a raptor bander with BBRR, view our Raptor Bander Training Protocol.

What to do if you find a banded bird?

Please report it using a toll free number (1-800-327-BAND), or on-line through the Bird Banding Lab website. Be prepared to provide the date and location the bird was recovered. Many recoveries involve hunted birds (ducks, geese), but every year thousands of banded birds hit windows and cars, or die of natural causes. When you report a banded bird, you may keep the band as a “trophy” and will receive a Certificate of Appreciation from the BBL with information about when and where your bird was first banded.

What is Bird Banding?

Bird banding is an activity that has been going on for centuries. The first recorded metal bird band was placed on a Peregrine Falcon in France in 1595. Bird banding in North America began with John James Audubon in 1803, when he tied silver cords to the legs of baby birds he wished to identify in the future. In 1909 the Bird Banding Association was formed, and in 1920 the Bureau of Biological Survey and the Canadian Wildlife Service took over as the agencies in charge of banding.

Bird banding data are useful in both research and management projects. Individual identification of birds makes possible studies of dispersal and migration, behavior and social structure, life-span and survival rate, reproductive success and population growth. For example, scientists learned that the Arctic Tern makes the longest migration flight of any living species, making an annual round trip flight of 25,000 miles!