In addition to being one of the best spring raptor migration sites on the continent, Braddock Bay is also home to a unique concentration of raptors in late summer. This is the result of the natal dispersal of several species, but primarily Red-tailed Hawks (Buteo jamaicensis). Natal dispersal is defined as a permanent movement away from an animal’s birth site, or in the case of birds, their nesting site. In late summer, young raptors are chased away from the nesting territory by their parents. During this time, and prior to fall migration for some species, hawks and other raptors are wandering about the landscape, finding their way in the world to a new territory. In our area, just like in the spring, southerly winds can bring many of those raptors to Braddock Bay, following the Lake Ontario shore in the same manner. Late summer natal dispersal flights have been documented for decades at Braddock Bay, but not in as consistent of a manner as the spring migration flights. Plans for a more official summer count began in the fall of 2018, and were implemented for the first time in the summer of 2019. The primary goal of this count is to document the magnitude of the natal dispersal of Red-tailed Hawks through the Braddock Bay area by following a consistent data collection protocol. A secondary goal is to document the occurrence of other raptor species during this time frame as well. 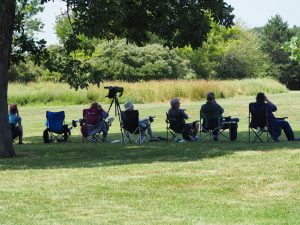 Volunteer for the Count!

The Summer Raptor Count at Braddock Bay is a volunteer lead count.  BBRR welcomes both experienced and novice counters to participate.  If interested in being a part of the team, contact us at information@bbrr.org.  You can also fill out a volunteer application on our Volunteer page. 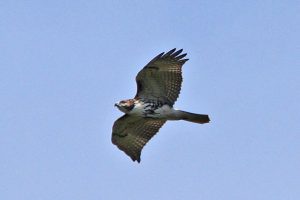