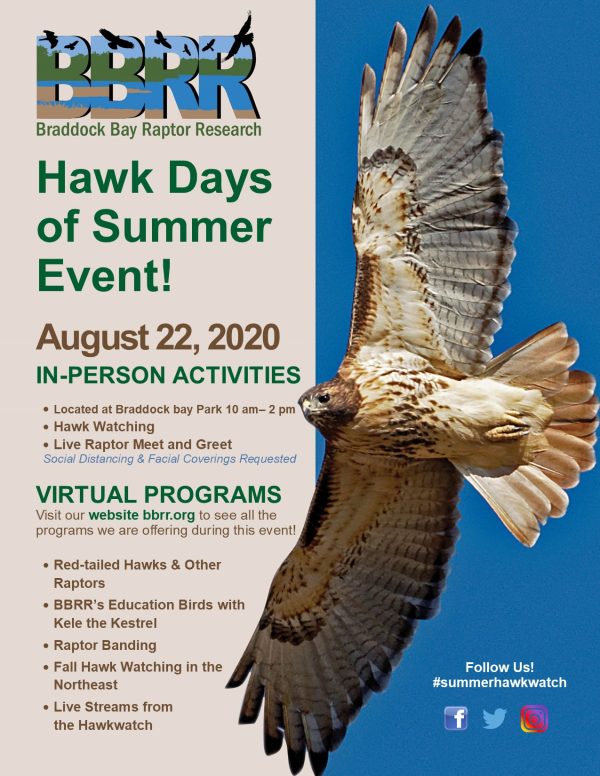 What is Hawk Days of Summer all about? 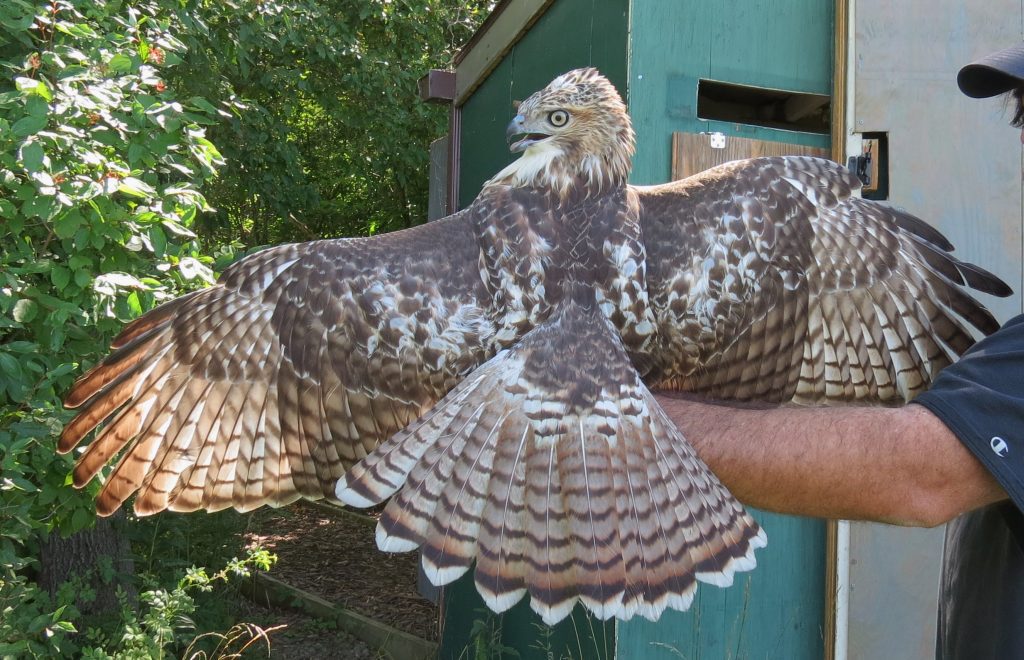 In addition to being one of the best spring raptor migration sites on the continent, Braddock Bay is also home to a unique concentration of raptors in late summer. This is the result of the natal dispersal of several species, but primarily Red-tailed Hawks.  Natal dispersal is defined as a permanent movement away from an animal’s birth site, or in the case of birds, their nesting site. In late summer, young raptors are chased away from the nesting territory by their parents. During this time, and prior to fall migration for some species, hawks and other raptors are wandering about the landscape, finding their way in the world to a new territory. In our area, these birds are pushed up here by southerly winds, following the Lake Ontario shore in the same manner that spring migrants do.

BBRR’s Hawk Days of Summer event will introduce you to the world of raptors and the wonders of the Braddock Bay landscape.  Raptor fans can choose to visit us for programming in person at Braddock Bay Park, or virtually through the internet, and get a glimpse into the fascinating lives of birds of prey and the passionate people who study them.

7:00pm - Red-tails of Braddock Bay and Beyond- Livestream

Learn about one of North America’s most common raptors the Red-tailed Hawk, and the incredible natal dispersal of youngsters that happens every summer at Braddock Bay.  BBRR’s efforts in studying these birds include over 3 decades of banding research as well as raptor counts to monitor the numbers from year to year.

Come Hawkwatch with Us!  Watch for raptors including Red-tailed Hawks, Turkey Vultures and Bald Eagles with experienced observers.  Receive a FREE raptor identification handout, and help keep count of the day’s flight.  Bring your own binoculars to aid in viewing.  Volunteer counters and guides will be wearing masks and social distancing, and we request visitors to do the same.

Raptor ambassadors including a Red-tailed Hawk, Great Horned Owl, Broad-winged Hawk and Merlin will be on display with our education crew present to teach you about these wonderful birds.  Please plan to attend with a face covering and practice social distancing.

Learn what raptors are being tallied at the watch and how and why hawk counts are conducted.

Great program for KIDS and the young at heart!  BBRR’s special mascot friend, Kele the Kestrel, gives us a look into the behaviors and adaptations that Red-tailed Hawks use to survive in the wild.

10:20am - Conversation with Kele - The Red-tailed Hawk

Kele will introduce you to BBRR’s Red-tailed Hawk in a conversation with raptor caretaker and BBRR President, Daena Ford. Great for KIDS and the young at heart.

Find out what raptor banding is, and what we learn from it.

Learn what raptors are being tallied at the watch and how and why hawk counts are conducted.

Presented by: Liz Magnanti from The Bird House, Pittsford, NY

4:00pm - Hawkwatching and Raptor Migration in the Northeast