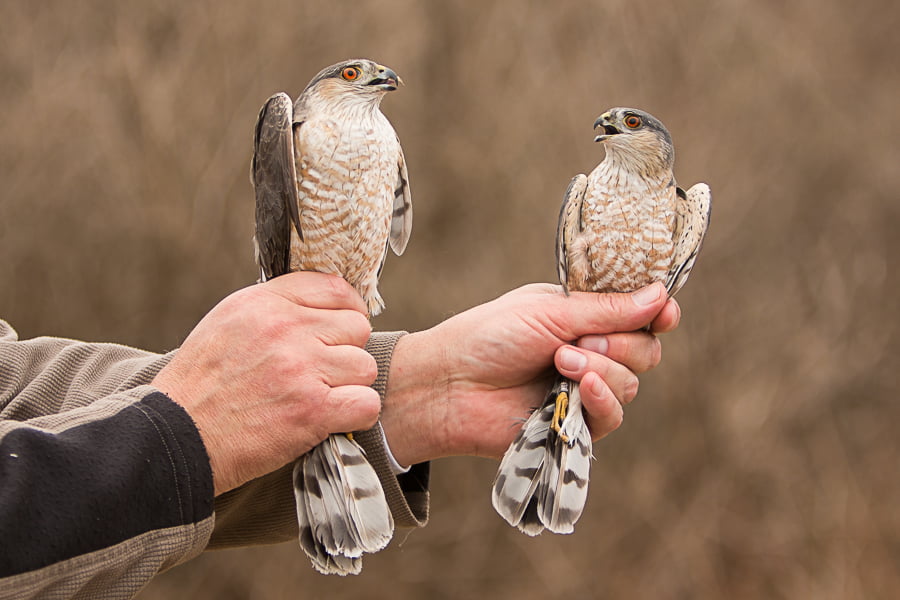 Photo above taken by raptor bander Jill Heimrich of a female (left) and male Sharp-shinned Hawk.  All other photos in this post taken by David Brown.

“Is that a Sharp-shinned or a Cooper’s hawk?”

It’s a question those new to birding ask all the time, but even experienced birders can have difficulty from time to time. With practice, anyone can identify this amazing raptor (usually!).

Sharp-shinned hawks are small and, as with most raptors, they are sexually dimorphic in size. Males could be almost as small as a kestrel or slightly larger than a blue jay, while females can be almost the size of male Cooper’s hawks. Adults of both sexes have grey coloring from above and orange bars across their breast. These hawks have thin legs and are named for the ridge found on their tarsus. 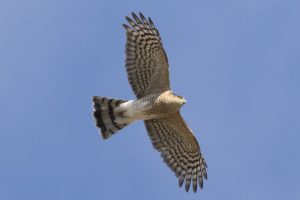 There are a few good field marks to differentiate sharpies from Cooper’s hawks. In flight, look at the head! Cooper’s Hawks have a larger head that goes past the wings while Sharp-shinned Hawks have small heads that barely show in front of the wings. In flight you can also look at the wing beats. Sharpies have quick, frequent flaps but Cooper’s Hawks are slower. Additionally, Cooper’s Hawks have a rounded tail tip and sharpies have a flat tail tip. Cooper’s hawks have lighter feathers around the back of their neck giving them more of a cap effect, while Sharp-shinneds have more of a hooded look.

Sometimes sharpies can be seen at bird feeders, but they aren’t there for the seed! Their diet consists mostly of small birds, though they sometimes eat other small animals as well. Sharp-shinned hawks are stealthy hunters, often surprising their prey.

Sharp-shinned Hawks have a wide geographic range. They can be found far north in Alaska and Canada, and all the way south through Panama. Some stay in the same place year round – such as those in the Appalachian Mountains or mountains in the west. Others migrate from the north to Central America.

The Sharp-shinned Hawk is a common, but not often seen, raptor.  However, during migration this little hunter of the woods can be seen in great numbers at various hawkwatch sites.  It is the third-highest species counted at Braddock Bay in spring, with a 10-year average (2010 to 2019) of 3,804 birds counted.  It also is the raptor species that gets banded the most.  The raptor that gets counted the most is the Broad-winged Hawk with a 10-year average of 34,000 but those are only occasionally captured.  The second most numerous species on the count is the Turkey Vulture, and they do not get banded at all.

The male Sharp-shinned Hawk is the smallest of the birds that we band at BBRR, weighing in with an average of 100 grams (3 ½ ounces).  The females are nearly twice that size, with an average weight of 180 grams.  (Weight data from personal banding records of David Mathiason.)  The banders at BBRR have banded 12,359 sharp-shinned hawks from 1984 to 2019, for a yearly average of about 344 birds.  Of those 12,359 hawks banded, 150 of them were encountered later (1.2 % encounter rate) and one of those 150, one was encountered a second time.  Those encounters tell some interesting stories. 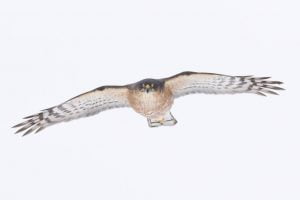 The bird that was encountered twice was originally banded on April 13, 1988 – a female that was aged as having hatched in 1987.  She was recaptured on Oct 6, 1988 by a bander in Ontario, Canada just north of Lake Erie.  In July of 1991, she was reported as having been found dead near Portsmouth, Ohio.  We can assume this female was hatched somewhere in Canada, in 1987.  There is no way to know how far south she ventured the following winter.  She was captured the first time and banded on her way north in 1988 by a BBRR bander.  That fall she was again captured, in Canada, on her way back south.   From that point on, however, we can only speculate about her journey.  Most likely this little hawk completed her round trip journey two more times, heading back to Canada to breed in 1989 and 1990.  She didn’t survive to make it back to Canada in 1991, mostly likely dying in Ohio during her spring migration back northward.  She lived about four years.

Our longest distance recovery was a female that made it all the way to Los Angeles, California.  That bird was a female banded in September, 1999 during her first year of life.  She was found dead in January of 2005 when she was five and a half years old.  Our longest survivor was a male who was banded May 9, 2007 when less than a year old (hatched 2006).  He was captured again in October of 2015 at Prince Edward Point, Canada.  At that point he 9 years old; he was released and sent on his way south to continue his journey.