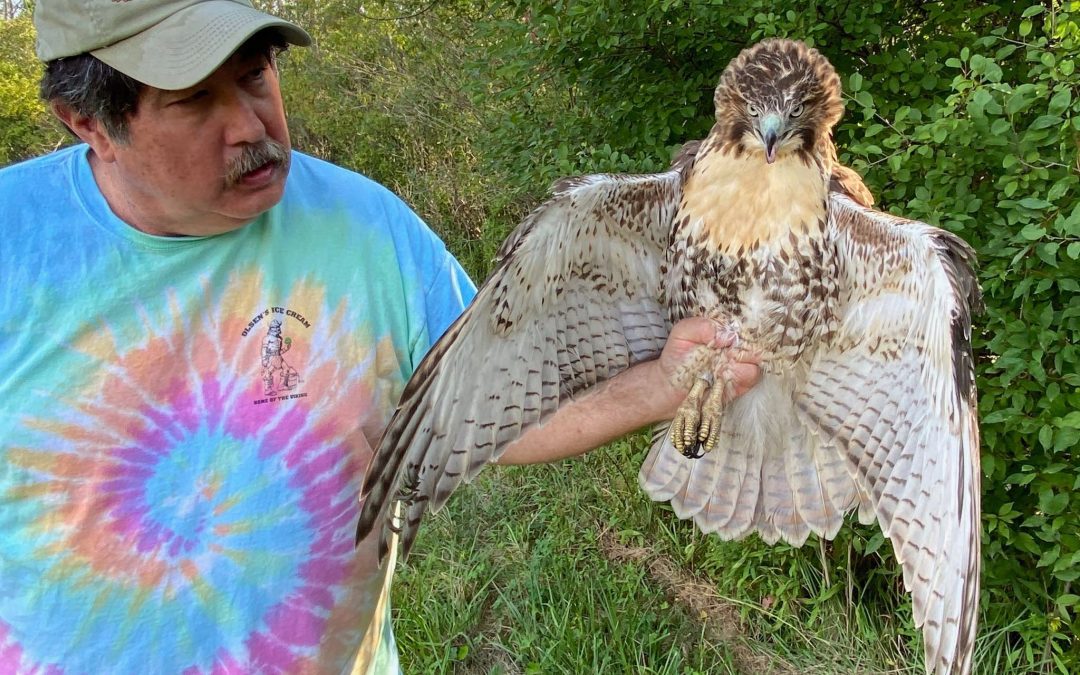 2020 would mark year 32 of natal dispersal raptor banding for BBRR.  This time of year is affectionately known amongst the BBRR crew as “August Red-tail Season” because it primarily takes place during the month of August, and the main raptor that is seen and banded during this yearly event is the Red-tailed Hawk.  Natal dispersal is a migration of sorts, where young raptors are spreading their wings and travelling away from their nesting sites.  On days with southerly winds, many of these birds end up travelling past Braddock Bay as they stick to the shoreline of Lake Ontario in a similar manner that the spring migrants do.  While Red-tailed Hawks are the most numerous species we see during natal dispersal, up to 12 species of raptors have been spotted throughout the month.  Like the red-tails, the other species spotted are typically juveniles as well.

Two BBRR raptor banding stations (Main and Payne Beach) were up and running for August this year, unlike last year where only Payne Beach was in operation.  Coverage was based on bander availability and predicted weather for the day.  The crew managed at least 16 days of coverage for the month. A total of 142 raptors were banded.  This total was made up mostly of Red-tailed Hawks, with 134 individuals of that species banded.  Cooper’s Hawks were the second numerous raptor banded with 6 making into the traps.  A highlight of the season was definitely the two Bald Eagles (see photo below) that master bander Dan Niven captured and banded, one each on August 22 and 23. 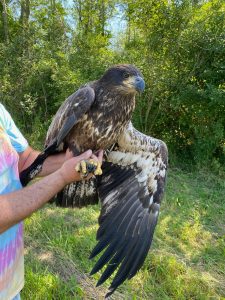 Another crew of volunteers from BBRR simultaneously conduct the Summer Raptor Count, following a protocol similar to our spring counts.  Daily and hourly counts can be found at Hawkcount.org. When you look at the results of those tallies, you can see that August 11 was our biggest count day with 667 raptors tallied. On that same day, bander David Mathiason, assisted by trainee Gabe Moore, banded 28 Red-tailed Hawks.  Another good day for banding came on August 24, when banders Jill Heimrich and Tim Willis, assisted by trainee Jess Phillips, banded 22 red-tails at Payne Beach station. The photo below shows Tim with two juvenile red-tails that show how different they can be in their coloring at times. 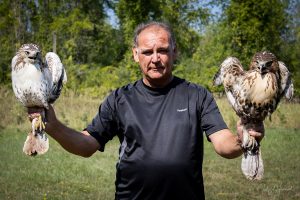 Main banding station will stay up and running part-time through October in hopes of capturing a few stragglers, but the majority of the natal dispersal flight died down by the end of August as is typical.  We hope to encounter some of these red-tails in the future, to continue to learn about their ecological needs and survival challenges.  If you would like to support BBRR’s banding research efforts, a great way to do so is by sponsoring a banded raptor through our Adopt-a-Hawk program.  There are plenty of Red-tailed Hawks “up for adoption” after this summer.